When you find yourself six hours into a supposedly five-hour journey and you’re nowhere near your final destination, you know something, somewhere has gone wrong. We were on our way to Cienfuegos and, crammed into the front seat of a 1970s Dodge with no end in sight, we were cursing our decision not to take the VizAzul bus.

We’d booked a ‘minibus’ from the official-sounding CubaTours in Viñales. Ruben, their loquacious salesman and possible owner, had assured us that not only would the trip be quicker than the bus, it would be door-to-door and would only cost €3 more. We were staying at the Finca la Guabina miles from anywhere so a pick-up from the ranch was ideal.

Our early morning pick-up seemed a lifetime ago as we stood in the shade of a tree by the side of a road just outside Havana. We were being ‘transferred’ from a 1980s Chevrolet Van driven by a certifiable lunatic, and were waiting for a car to show up that would take us the rest of the way to Cienfuegos.

This was how six random travelling acquaintances and their luggage ended up like sardines inside a 1970s Dodge for five hours on Xmas Day. Tired, irritable and with a new appreciation of what entrepreneurship in the new Cuba looks like, we finally made it to Cienfuegos nine hours after setting off. Not to worry, we had a reservation at a really nice casa particular recommended by our hosts in Viñales. 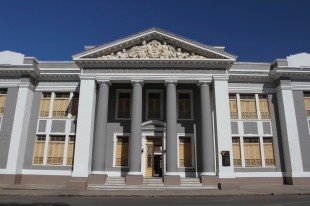 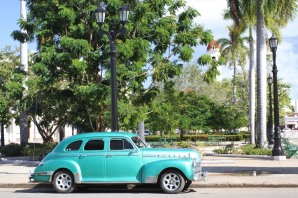 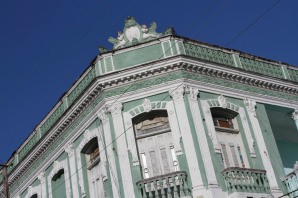 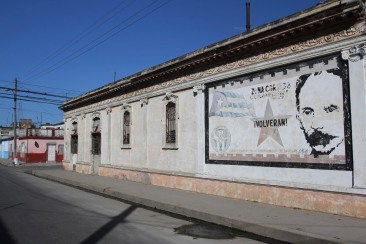 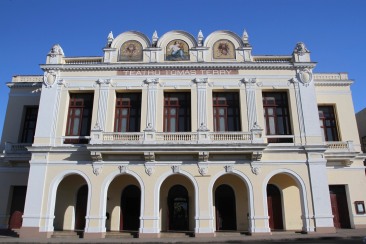 After driving around Cienfuegos for 45 minutes trying to find the casa, we arrived to discover our room had been given away to someone else. This happens a lot in Cuba. This final (bale of) straw landed heavily on the camel’s back. We were shown to a different casa a short walk away, the dark clouds of frustration gathering with every step.

It turned out that our new casa hosts, Hector and Ilia, were wonderful. Helpful, knowledgeable, opinionated and very friendly, our time in Cienfuegos was greatly enhanced by staying with them. Their casa didn’t do food, but in Cienfuegos there are plenty of options for eating, including the new Big Bang Cafe on the Paseo el Prado. It does a good breakfast and has very friendly staff.

After our delayed arrival we just had time to walk to the magnificent Plaza de Armas in the historic centre of Cienfuegos before nightfall. Just this short walk took us past beautiful streets and colourful houses. The plaza itself was one of the prettiest I’ve ever seen, and was busy with young people and families strolling around and using the public wifi. It felt like an easy-going place to spend a few days.

It was still Xmas Day and we decided that we needed to celebrate, even if it was just to celebrate the end of a long day sitting in decades-old American vehicles. On one corner of the square, next to the theatre, was a bar with an outside space. We ordered up a couple of mojitos, some cold beers and bought some peanuts from a passing woman (all the major food groups). Finally, we could relax.

10 thoughts on “Cienfuegos, a neoclassical city by the sea”