It was only when I stood on the rim of the 2,829 meter (9280 ft) Pico do Fogo’s volcanic crater, sulphur fumes burning my nostrils, that I could truly appreciate a simple fact about the island of Fogo: it is an enormous, and very much active, volcano. The views from the top are, literally, awe inspiring. The intensity of the mid-Atlantic light and the thinness of the air make for a surreal experience, and as you take in the 360 degree view its hard not to believe you’re dreaming.

When you see what it looks like from an Airbus cockpit, its like a fantasy island…one that may well have dinosaurs or an ancient civilisation inhabiting it.

Pico do Fogo, taken from an Airbus cockpit by Aldo Bien (Wikimedia Commons)

The base of the Pico do Fogo sits inside another gigantic volcano and, as you stand there in a landscape scarred and discoloured by centuries of volcanic activity, the sense of being in a post-apocalyptic world is overwhelming. The island of Fogo erupted out of the ocean several millennia ago and has witnessed numerous violent eruptions ever since, the most recent in 1995. The most violent, in the 1680s, lasted for several years and the majority of Fogo’s inhabitants had to be evacuated.

This poses a question, why would people choose live within the crater of an active volcano? Proving that humanity is not to be underestimated, the village of Chã das Caldeiras sits amidst this blackened and charred landscape, and is home to around 1000 people, who cultivate grapes and figs, and guide tourists around the crater. The village has no running water (water is collected in barrels during the rainy season) or mains electricity. It was in Chã das Caldeiras that I met my guide, another Paul, who was going to take me to the top of the volcano.

At his house, constructed out of volcanic rock, he introduced me to his wife, Luisa, and their young daughter. As we climbed the side of the conical Pico do Fogo, Paul pointed out a giant lava flow in the crater below which had destroyed a large part of the original village. The village had been rebuilt and most people had returned. I’d been biting my tongue, but finally asked him why he and Luisa had decided to live and raise a family inside the crater of an active volcano. One which could erupt at any time.

The simple answer was, “this is our home.” Plus, the volcano is constantly monitored for activity, so people in Chã das Caldeiras felt safe in the knowledge that, if the worst happened, they’d have plenty of time to evacuate the village. That’s alright then. 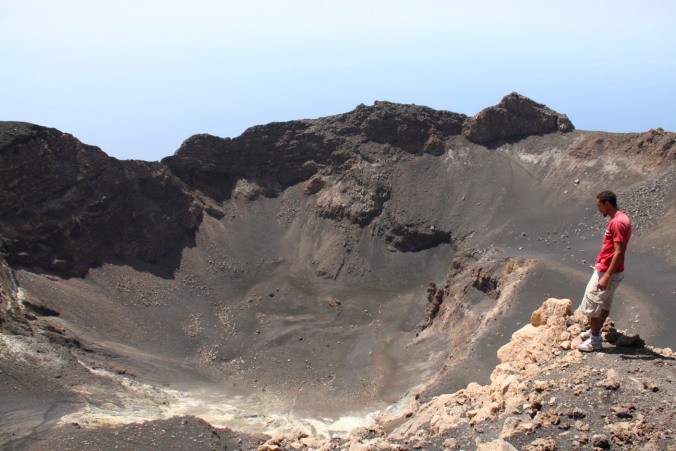 Paul my guide on the crater at the top of the Pico do Fogo, Fogo, Cape Verde, Africa

Crater at the top of the Pico do Fogo, Fogo, Cape Verde, Africa

The panoramic views offered from the top of the Pico do Fogo highlight the giant caldera (the cauldron-like bowl) that the village sits in, and the enormous cliffs formed from the walls of the volcanic crater that tower over it. The caldera is 9km wide and the cliff walls are over 1km high. It is immense. To the west is a huge hole where the walls of the crater have collapsed, and the land runs all the way down to the ocean. Flows of lava cover the floor of the crater, their age detectable by their colour.

The fun wasn’t restricted to the views though. The 1km descent was a combination of extreme sports and idiocy. The ‘safest’, and certainly the quickest, route down was to literally run down a near vertical slope of volcanic scree. As I was explaining my inherent fear of death to Paul, he simply plunged downwards with an encouraging smile. Within seconds, he was barrelling down the mountainside obscured by a cloud of volcanic dust.

Left with little option but to get on with it, I set off downwards and found myself picking up an alarming amount of speed, even though I was sinking up to my knees in scree. Life has taught me never to get too far ahead of myself, and just when I thought I was getting the hang of it I took an almighty tumble. Cartwheeling over and over down the hill, I finally came to an ignominious stop covered from head to foot in grey volcanic dust. Thousands of bits of scree were now inside my clothes and boots. We’d taken nearly three hours to climb up the volcano, it took about twenty minutes to descend. 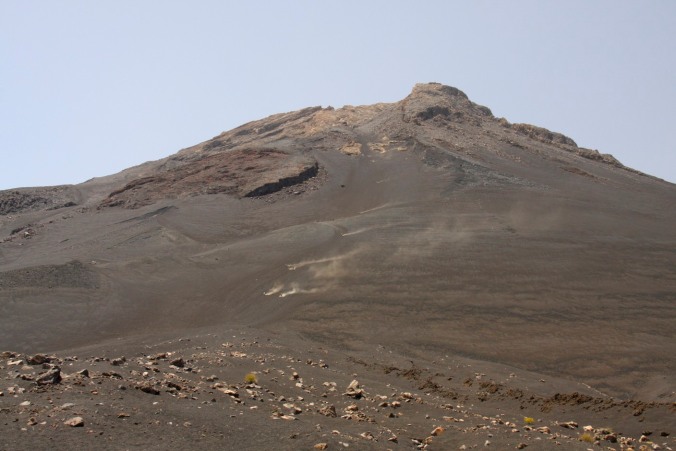 I eventually made it to the bottom, more or less in one piece, and celebrated my survival with lunch in the crater and a couple of glasses of Fogo wine, the grapes of which were growing all around the crater floor. No long terraces of vines here, just single vines dotted around the crater producing about 160,000 litres of wine per year. This makes Cape Verde one of the world’s smallest wine producers, but the uniqueness of its wines born from fire brand makes the volume meaningless. Where else can you drink a wine cultivated in the middle of a lava field.

The community in the crater has an unusual history. Many of the inhabitants of Chã das Caldeiras have light coloured skin and blonde hair. Legend has it that these are the descendants of a French aristocrat, the Count of Montrond, who settled on the island in 1870 while en route to Brazil. He is alleged to have had numerous sexual relationships with women on the island, hence the number of blonde-haired descendants. As well as an overactive libido, he is also credited with bringing grape vines and viticulture to the island. On reflection, those two things may go hand-in-hand.

From the ocean, the island of Fogo presents one of the most dramatic sights I’ve ever seen. Rising 2,829 meters into the mid-Atlantic air, the Pico do Fogo, a vast black volcanic cone, towers over the island and dominates the imagination. Dramatic as entry by sea into Fogo’s tiny and chaotic port is, it is impossible to truly visualise the island without seeing it from above. I didn’t have the opportunity to fly over it, so I hope this photograph, taken from the International Space Station by Canadian astronaut Chris Hadfield, gives some indication of island’s extraordinary geography. 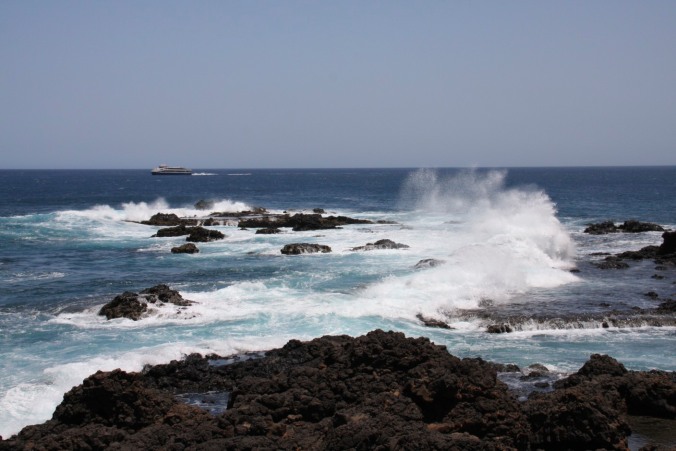 Fogo is a giant, and still active, volcano. Perhaps more precisely, it is a giant volcano with another really big volcano on the top. The island literally erupted out of the ocean several millennia ago, and pushed upwards to a height of around 3.5km. Today the highest point is lower than this thanks to the top part of the volcano collapsing (visible at the bottom left of the photo from space). It last erupted in 1995 and evidence of previous eruptions are everywhere on the island. One massive eruption in 1680 literally blew Fogo’s top off, causing most of the inhabitants to evacuate to the nearby island of Brava. 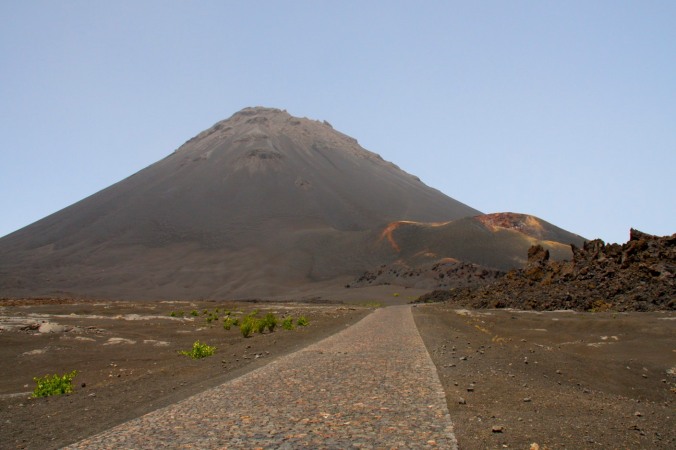 The eruption lasted for several years, and was so large and the lava so bright that 17th Century sailors used the tower of smoke and ash to navigate by during the day, and the bright lava fires on its peak to navigate at night. It was from this eruption that Fogo got its name. Fogo is Portuguese for ‘fire’.

I only had two days on Fogo, and almost from the moment I arrived I wished I had more time to explore this unique island and its culture. I was staying in the island’s relaxed and picturesque capital, São Filipe. Home to around 20,000 people and a host of old colonial buildings, São Filipe sits dramatically on top of cliffs overlooking Fogo’s iconic volcanic black-sand beaches and the Atlantic Ocean. There are plenty of good restaurants serving fresh fish and a friendly cafe and bar nightlife where you can taste one of the islands more unusual products – Fogo wine made from grapes cultivated in rich volcanic soil. 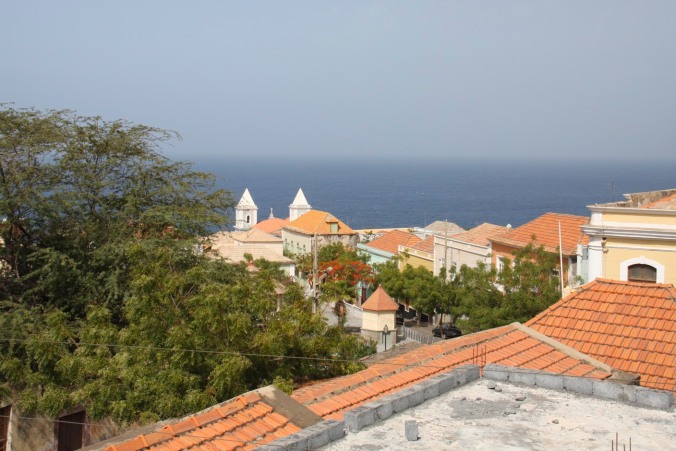 The view over São Filipe to the ocean, Fogo, Cape Verde, Africa 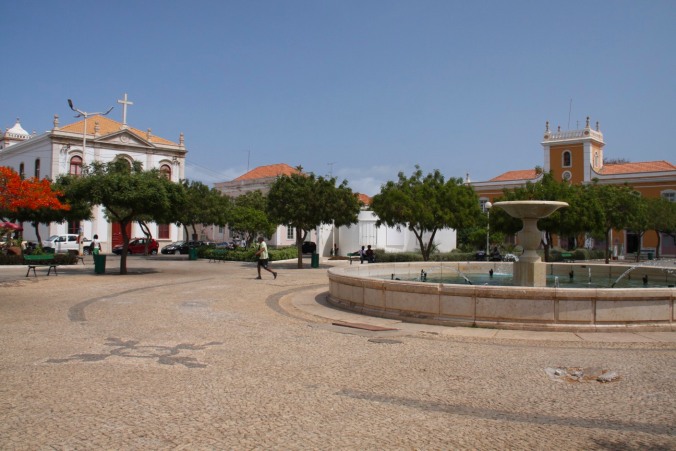 Fogo is blessed with a higher than average rainfall than most of Cape Verde’s other islands. Coupled with the nutrient rich volcanic soil in the west of the island, this allows for a surprising level of agriculture. When Fogo was first settled by the Portuguese, slaves were used to grow cotton here; with the collapse of that industry regular agriculture took its place. In the volcanic soil it is possible to cultivate grapes, coffee beans and figs, and there is a small but flourishing wine industry. Fogo wine is unlike any I’ve tasted before and, while French wine makers are unlikely to be quaking in their boots, the wine is good. 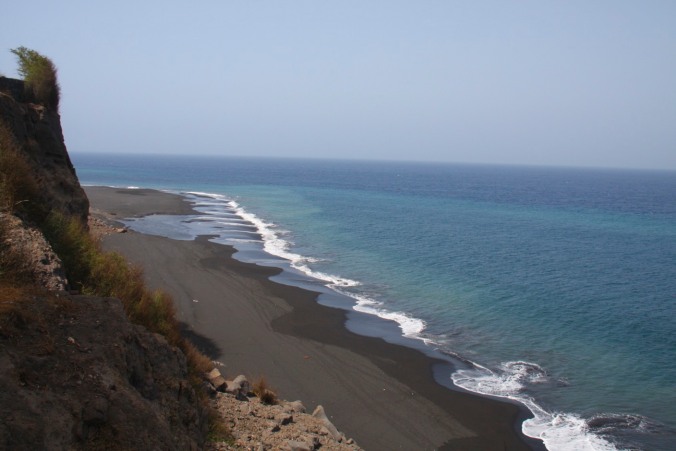 Even close to São Filipe, strolling along the beach on a week day is to find yourself alone – a recurring theme on my visit to Cape Verde. The black volcanic beaches of Fogo are an entirely different experience to the white sand beaches of Maio, with steep cliffs rising dramatically directly behind the beach. Walking on Fogo’s beaches is oddly counterintuitive, so hardwired is the idea that the perfect beach has golden sand. For the record, as it squeezes between your toes, lava sand feels exactly the same.

São Filipe is one of the most attractive towns in Cape Verde, with a wealth of brightly painted Portuguese colonial buildings and a relaxed small town vibe. As a special treat, and because I was only staying for a couple of nights, I stayed in the converted Colonial House B&B with lovely wooden floors and a veranda. Although I was the only person staying there (and one of the few tourists in São Filipe), it was a wonderfully atmospheric choice with genuinely friendly staff. 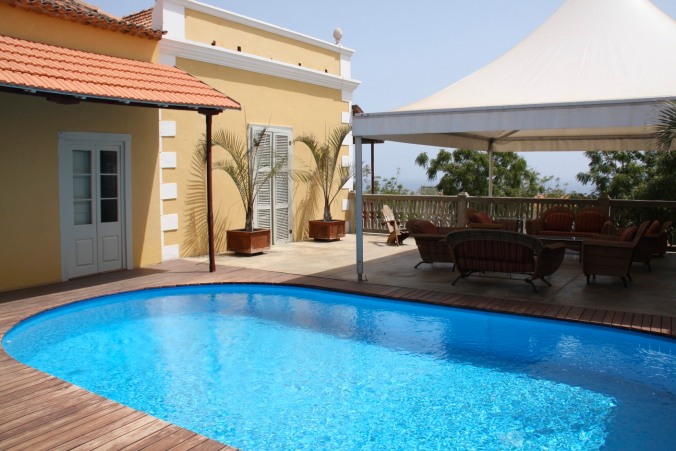 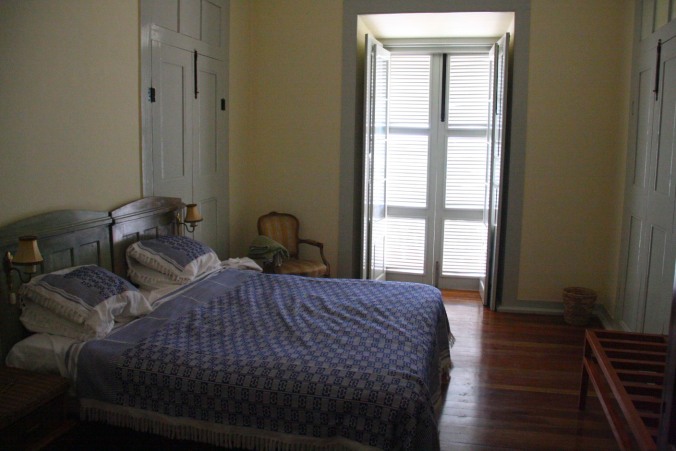 WIth so little time available, I wasn’t going to be able to explore much of the island, but I had arranged to visit the small village of Chã das Caldeiras, which sits in the giant volcanic crater, from where it would be possible to climb the Pico do Fogo. The next time I come to Fogo, I will definitely spend more time in the surrounding villages and make a trip to the small island of Brava a short boat ride away. 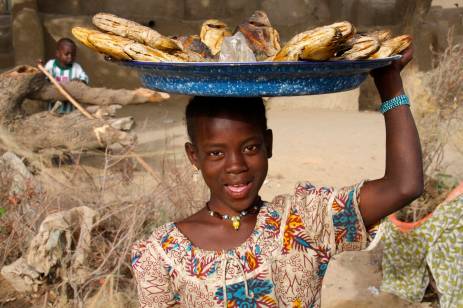 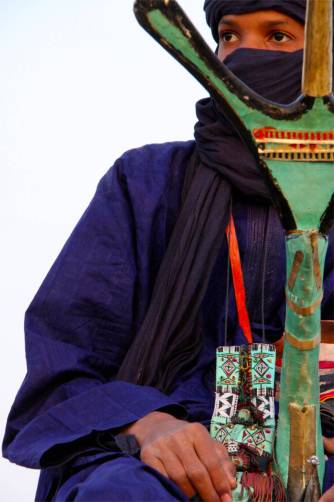 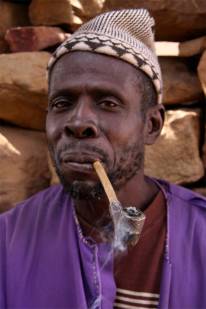 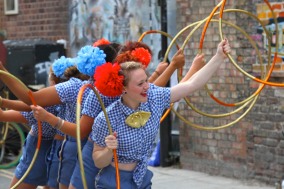 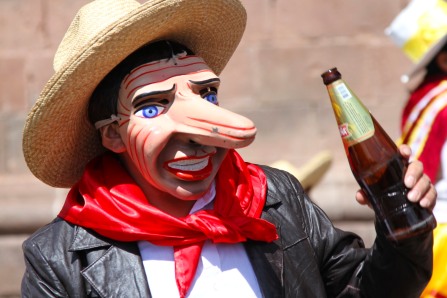 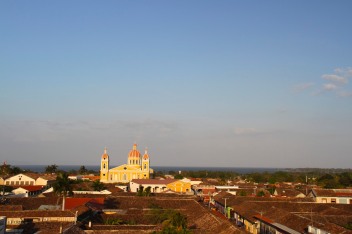 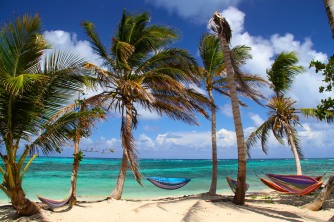 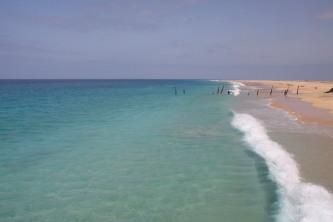 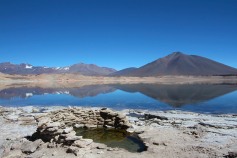 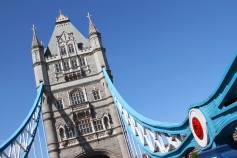 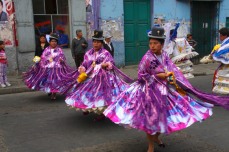 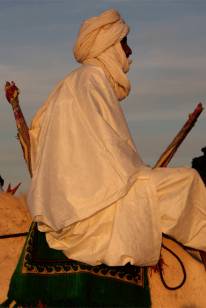 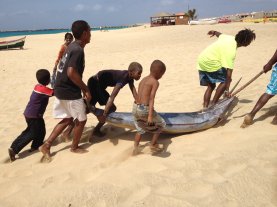 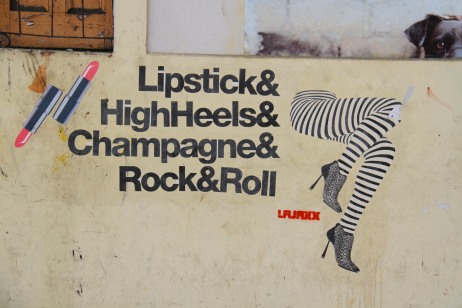 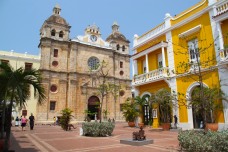