Buddhism seems like such a peaceful ‘religion’*. Yet, like all institutions with vested interests, it has the capacity for violent factionalism, meddling in politics and generating vast amounts of money that might better be spent on helping the needy and marginalised. So it is in Thailand. As a tourist you wouldn’t notice, but a dispute rages within Thai Buddhism.

At the heart of this struggle, an insurgent Buddhist sect is taking on a conservative establishment strongly aligned with both the monarchy and military junta that runs the country. The dispute centres around the appointment of a new spiritual leader for Thai Buddhism, the Supreme Patriarch. Thais haven’t had a spiritual leader since 2013 and, as the dispute gets more political, the position continues to remain empty.

These frictions aside, the many Buddhist temples that are scattered around the Thai capital provide a peaceful alternative to life on Bangkok’s hectic streets. A little like being in Rome, it’s practically impossible to walk far without bumping into a temple or monastery, the radiant colours of the buildings sparkling under the intense sun. It’s not unusual to see orange robed monks on the streets. 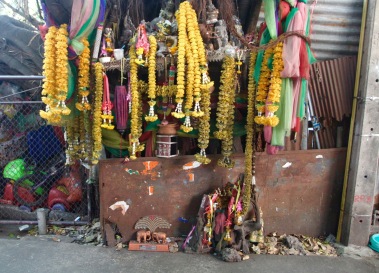 There are over four hundred wats, or temples, in Bangkok, but you can add to that number many more shrines that are everywhere around the city. Some of the wats are massive complexes, frequently swamped by tourists, others are small and far from the tourist trail.

Finding myself in the Phra Nakhon District of central Bangkok it was hard to miss Wat Bowonniwet Vihara Rajavaravihara. This is a major Buddhist temple with plenty of royal connections and a steady stream of worshipers coming and going. Numerous princes have studied at this temple, including King Bhumibol Adulyadej, or Rama IX as the current Thai monarch is known.

Given the reverence that the majority of Thais have for their king, it’s no surprise that this is a popular temple. The most striking feature from outside the temple is the large golden chedi or stupa that majestically rises into the sky; inside, the ornate decoration of the temple is equally impressive. In one temple monks were praying in front of a large Buddha statue.

Not that visiting a Buddhist temple is all spirituality, it’s also fraught with danger. As with many places of worship, you’re required to remove your shoes when entering certain parts of the temple complex. When I got to the main stupa I had to remove my flip flops before ascending some steps into a courtyard.

The floor of the courtyard had been exposed to an intense sun for several hours, and the bare stone floor felt hot enough to fry an egg on. I swear I got third-degree burns on the soles of my feet. At least the sight of me running from one patch of shade to another gave a couple of Thai families some amusement.

For safety reasons, I stuck to shaded areas after this painful experience, and visited several buildings where there were glorious paintings on the walls. These are common in Buddhist temples everywhere in the world, and depict instructional scenes from the Buddha’s life, as well as scenes of Thai daily life. They are very colourful and rather beautiful.