It’s hard to imagine the visionary mind behind the immense creative genius that was Hieronymus Bosch. His artworks combine the surreal with the nightmarish, seemingly playful yet terrifyingly sadistic. If the symbolism of his work is hard to understand in the 21st century, in medieval Europe his meaning would have been instantly recognisable.

A man straddles the blade of a knife, forced to slide along it to enter Hell. A pig wearing a nun’s habit kisses a man. A monstrous bird-demon eats sinners and defecates them into a pit. Bizarre animals inflict terrible punishment on humans. A hunter is killed by a hare and eaten by hounds. Musicians are tortured on giant musical instruments. A pair of giant ears, pierced by an arrow, wield a large knife. All this, and more, set against the desolate and fiery landscape of Hell. 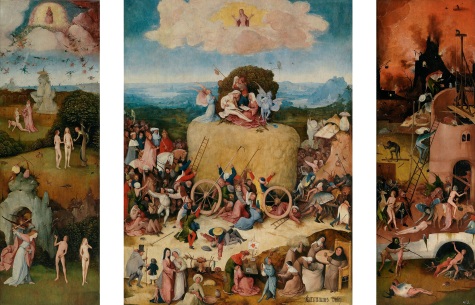 The Hay Wain by Hieronymus Bosch 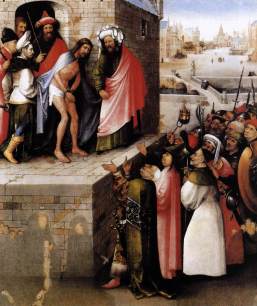 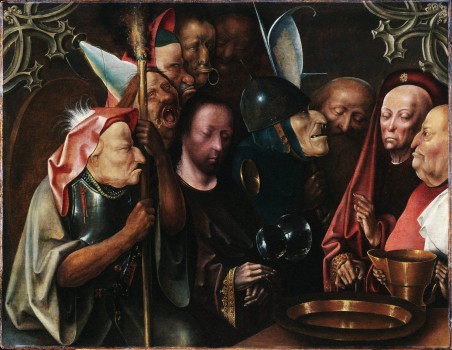 Christ Before Pilate by Hieronymus Bosch 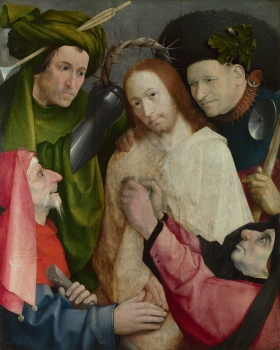 Those are all scenes from The Garden of Earthly Delights – a triptych depicting Adam and Eve in the Garden of Eden; a central scene of earthly delights full of medieval symbolism and populated by bizarre creatures, giant fruits and naked people; and a final panel showcasing the horrors awaiting sinners in Hell. To say Bosch had an interest in the consequences of humanity’s moral failings would be an understatement.

It was paintings like this that made Bosch famous across Europe, and his visionary work had enormous influence during his lifetime. The most powerful monarch of the era, Catholic zealot King Philip II of Spain – he who dispatched the Armada against England, who attempted to crush Dutch independence, and who was the principle patron of the Inquisition – had one of Bosch’s paintings in his bedroom.

Interestingly, it was was Bosch who first painted (possibly invented) the concept of the ‘light at the end of the tunnel’. The idea that those who went to Heaven did so through a tunnel of light. Amazing to think this idea, so familiar today, was first popularised by a Dutch painter who died in 1516.

To celebrate the 500th anniversary of his death, a small museum in his home town of ‘s-Hertogenbosch managed against all odds to bring together the majority of his work in one blockbuster exhibition. For the first, and probably the last, time the majority of Bosch’s existing works came home, including twenty major paintings and numerous sketches. Light at the end of the tunnel, indeed.

So popular was the exhibition that we only managed to get tickets for a Tuesday afternoon. As we made our way to Den Bosch (shorthand for ‘s-Hertogenbosch), expectations were high. The exhibition was very busy but also extraordinary and beautiful. Almost better though, was the Bosch trail which turned this small, picturesque Dutch town into an open air gallery-cum-treasure hunt.

In fact, it wouldn’t be unfair to say that Den Bosch had gone a little Hieronymus Bosch crazy. Almost every shop had a Bosch-themed window display regardless of what it was selling. The range of Bosch-related merchandise on sale was mind-boggling in its infinite variety – we are now proud owners of one of the most complex jigsaws known to humankind.

It felt like the Golden Goose had landed and everyone was taking their opportunity while it lasted. I can understand it, ‘s-Hertogenbosch is hardly a name that previously had international recognition. That’s a shame, because it’s a lovely town with a medieval centre worth a day of anyone’s time…but more of that later.

* All photos of paintings by Hieronymus Bosch (circa 1450–1516) courtesy of http://boschproject.org via https://commons.wikimedia.org