The Hague has been the backdrop for our lives in the Netherlands for just over four years, yet I’ve written very little about the many charms of this vastly underrated city. Although Amsterdam is the capital city, The Hague is home to the Dutch government and the Dutch monarchy, it’s where the diplomatic community is gathered, and is one of the most international cities I’ve visited. Walk the streets during the week and you’ll hear a couple of dozen languages being spoken. There are excellent museums, as well as a decent food scene, but tourism has yet to have any real impact on the city.

Except, that is, for the seaside resort of the virtually unpronounceable Scheveningen, a place name so fiendishly tricky to pronounce correctly it was said to be used to identify German spies in the Second World War. Ironically, Scheveningen’s beach is now one of the most popular places in the country for German tourists. I’m loath to encourage an upsurge in tourism, but on a recent sunny weekend I decided to spend a day wandering the city exploring some of my favourite haunts.

It’s true that The Hague lacks the wealth of historic buildings that grace other Dutch cities, and even though I live overlooking a canal, this is not a city that can rival Utrecht or Delft for quaint canals. It’s also true that the Dutch often consider The Hague to be boring, with a cultural scene that is less cutting edge than Rotterdam and less varied than Amsterdam. When I moved here, my boss suggested that since I’d lived in London I might want to work in The Hague and live somewhere more exciting.

The Dutch have a saying, “Amsterdam to party, Rotterdam to work, Den Haag to live”, and the truth is that we’ve not regretted a single day of our time spent here. Where else could you find the Mauritshuis, perhaps the most perfectly sized art gallery in the world, and also home to Vermeer’s Girl with a Pearl Earring. It might be the most famous piece in the former 17th century palace, but I rarely visit without marvelling at the many other Dutch masters on show: Rembrandt, Steen, Hals, Rubens, van Dyck, Dou. 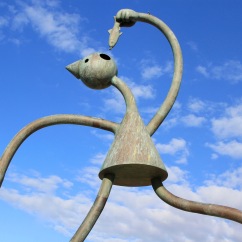 At the beach in The Hague, Netherlands

The Mauritshuis sits next to the 13th century Binnenhof, which was at the centre of Dutch government during the 16th century Golden Age, and is still home to parts of the modern Dutch parliament. This historic area of the city is where you’ll find good restaurants and upmarket shopping. First though, spend an hour or two hanging out in one of the pleasant restaurants in Plein, the most perfect of all The Hague’s squares. Traffic free and with lots of outdoor seating, it’s the place to watch the world go by.

Afterwards, go for a stroll in the nearby Lange Voorhout and don’t stop until you find yourself surprisingly in the middle of the Haagse Bos woods. Here you’ll discover the Huis ten Bosch, one of the three official royal residences, and the excellent Louwman Museum. Hop on a bike and head back to town, because no visit to The Hague would be complete without seeing the utterly brilliant Panorama Mesdag, the epic creation of the city’s most famous artist.

Mesdag is most famous for his seascapes and nearby is the Zeeheldenkwartier, Sea Heroes Quarter, filled with quirky shops, and good restaurants and bars, including the Grand Café Victoria on the area’s centrepiece Prins Hendrikplein. From here it’s only a tram ride away to the beach at Scheveningen, where you can stroll the re-opened pier. There are some good eating and drinking options along the pier, including a restaurant out over the water, and the elevated position gives great views along hundreds of kilometres of golden beaches.

Walk along the beach away from the centre of the resort (like many seaside towns this is the least attractive part of the beach). Go north and find a good beach bar to sit down and watch the sun set over the North Sea. If you’re lucky, you can do this while drinking something brewed in one of the local microbreweries, Kompaan or De Prael. You can stay down on the beach until the early morning, or grab another tram back into town to sample some of that ‘boring’ Hague nightlife. I’m going to miss this city.

4 thoughts on “Homage to The Hague”