Salamanca feels old. Walk around the beautiful historic centre of the city and you’ll find yourself wandering ancient streets, between buildings that date back to the early 12th century. These include the University of Salamanca, one of Europe’s oldest, which was granted its charter in 1218. Salamanca has been around for way longer than that though. It was already important and rich enough for Carthaginian general, Hannibal, to put it to the sword in 217 BC.

Hannibal’s defeat, the destruction of Ancient Carthage, and the the rise of Rome, saw Salamanca become a strategic Roman trading centre. Sitting on the Ruta de la Plata, along which silver from the north flowed to Sevilla, it grew wealthy. The Roman bridge, that has spanned the River Tormes for over 2,000 years, is just one of the highlights of a visit to Salamanca. It seems remarkable that, in the 21st century, you’re able to walk across a perfectly functional Roman bridge.

On the city side is a statue of Lazarillo de Tormes, the main character from Salamanca in an anti-clerical 16th century novella banned by the Spanish Inquisition. We strolled across it under a fierce sun, people cooled off in the water below and lazed on the river beach. On the opposite side of the Tormes a pleasant park provides views back to the city and over the cathedral. On a peaceful morning, the city reflected in the water, it’s gorgeous.

We crossed back on the Puente de Enrique Estevan and walked uphill to the Convento de San Esteban. This ornate 16th century monastery is most famous for having housed Christopher Columbus. He lived in Salamanca between 1486 – 87, when defending his idea of sailing west to find the Indies against Salamanca’s scholars. In the early evening sunlight, the facade glows golden. In this light, the city’s many sandstone buildings earn it the nickname, The Golden City. 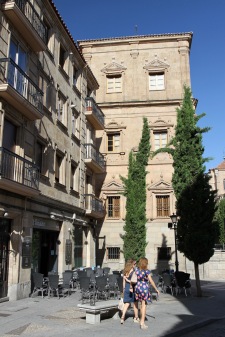 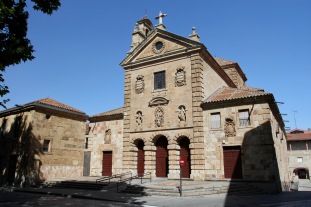 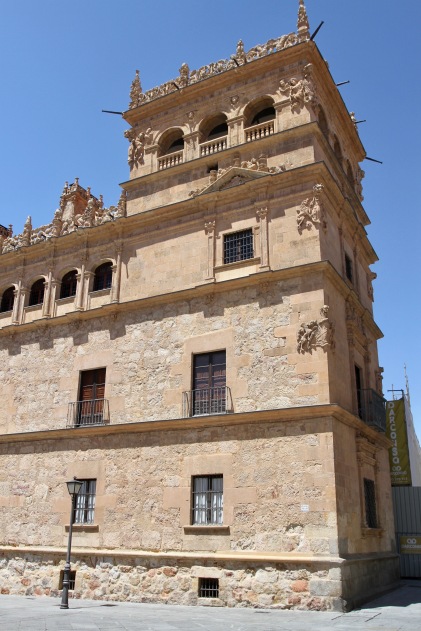 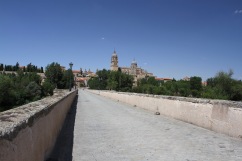 Leaving the church behind we wandered upwards past the cathedral to the university, weirdly serene outside of term time, and on to the delightful Casa de las Conchas. This palace is named after the 300 scallop shells that decorate the facade, and is the former home of Rodrigo Maldonado de Talavera, a member of the Order of Santiago. No prizes for guessing the symbol of the Order. You see the scallop shell everywhere in this part of Spain – it marks the pilgrim route to Santiago de Compostela.

Despite a reasonable smattering of tourists, especially older Spanish tour groups, the city has the feel of an open air museum when the students aren’t around. We made our way through streets empty of traffic and people, and marvelled at the ornate facades of historic churches and palaces. It’s not just history on offer here though, Salamanca’s reputation for mouth-watering food is well known. Excellent tapas bars serve delicious regional wines, and there are a clutch of top notch restaurants.

For all its fine dining, the signature dish of Salamanca is the humble hornazo. A baked pastry traditionally filled with ham and egg, It’s now offered with a variety of fillings – including, whisper it, vegetarian options. It’s a great snack to take on long car journeys. The local wines were just as eye-opening as the food, and we sampled several grapes that we’d never previously come across. The rufete wines of Bodega La Zorra were a firm favourite.

Our final night in the city saw us in the buzzing barrios of Garrido and Buenos Aires, renowned for their nightlife and plethora of tapas bars. During term time, the streets in these interesting neighbourhoods are packed with students. Even though it was much more slow paced when we were there, we enjoyed an evening searching out the best tapas places. History is all well and good, but no one comes to Spain without plans to sample plenty of local delicacies.

5 thoughts on “Salamanca, ancient history in The Golden City”