Art is meant to stir the soul, divide opinion and reflect humanity’s deepest, darkest desires. The Catholic Church prudishly painted fig leafs over the male genitalia of Michelangelo’s epic, The Last Judgment, fearful of the effect of such obvious sexuality on innocent minds. The Nazis banned ‘degenerate’ art, art that didn’t reflect their political, ethnic and social views. Although it didn’t stop many of them from admiring it in secret.

The power of art to provoke such responses is one reason that it retains its influence, even in an era of social media and wearable technology. I was reminded of this when I was wandering through a Berlin housing estate close to Tegel Airport. It’s not an obvious open air gallery, but it has street art powerful enough to have polarised opinion and be seized upon by opportunistic politicians seeking to exploit discord.

It’s an odd feeling to be walking between tower blocks, local residents going about their daily business of walking dogs, pushing prams and carrying shopping, while forty-metre tall paintings loom overhead. Some, like the glorious Blue Starling from Dutch artists Colin van der Sluijs and Super A, seem unlikely to cause disquiet. Willkommen Refugees, by Italian artist Borondo, seems calculated to do the exact opposite.

This massive painting depicts a vulnerable and distressed young girl, a refugee, semi-naked and apparently covered in blood. In the background of a snow covered forest, a naked figure is pierced by arrows. It’s a difficult sight to ignore. With people who are fleeing terror and war dying in the Mediterranean, and being persecuted when they reach dry land, I assume that was the artist’s point. For some residents, the point was that no one asked them before it was painted. 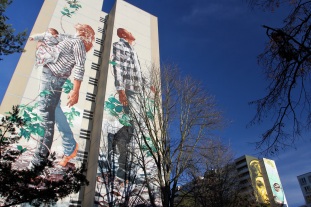 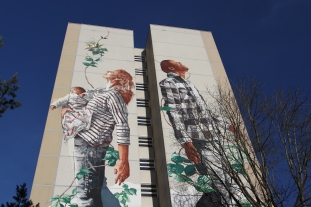 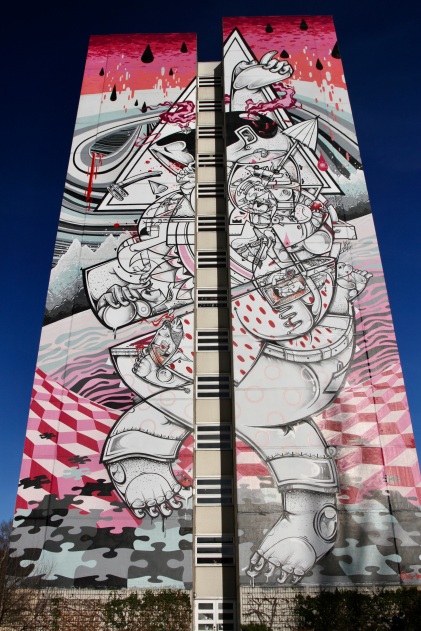 Some people complained that it would scare, or even scar, their children, pointing to the nearby infant school. A local political candidate for the centre-right CDU (the party of Angela Merkel) saw this as a potential vote winner, and started a campaign to have it removed. I can understand local residents who had no choice in what was painted, and it is perhaps a little patronising to be force-fed this ‘lesson’ every day as they walk past. Political opportunists on the other hand …

Close to the painting is an area of refugee housing surrounded by security fencing – a familiar sight in German cities. The views of a local resident on their proximity to each other gave me pause for thought, “For the refugees … I don’t know, but if I would have seen what they had seen, I would want to see something different at a place, which will be my new home in safety … no reminder every day of a horrible past.” That’ a pretty good reason to take all residents’ views into consideration.

The controversy is a couple of years old now, but it highlights the impact street art can have on a community. It’s not all gentrification and independent coffee shops. This area close to Tegel is a typical working community, and while I’m sure a majority of residents thought a street art project was good for their neighbourhood, it provides proof of what happens when art offends people’s’ sensibilities. Luckily, the rest of the pieces are much more fun to look at.

I particularly liked the Herakut piece called I Will Not Let You Down, which draws on the close relationship between Berlin and the wild countryside around it. The lovely Cycle of Life by Fintan Magee, depicts the indomitable spirit to rebuild after disaster. People and plants appear on top of urban rubble, a not so difficult to understand reference to post-war Berlin. My favourite, Little Giants by Cristian Blanxer, stands in isolation a 10-minute walk away. It’s well worth the effort.