Should you ever find yourself tiring of quaint medieval German towns filled with narrow cobbled streets and half-timbered houses, beautiful squares and ancient churches, make a trip to Goslar. Even by the standards of other ancient Harz communities, Goslar has history. Next year, the town celebrates the 1,100-year anniversary of its founding in 922.

That fact alone makes Goslar an historic place, but it is the town’s location next to the Rammelsberg, a 635 metre-high hill in the Harz Mountains, that has defined the course of its history. The Harz is renowned for its mining history, iron, copper, lead have been dug out of these hills for well over a thousand years. The Rammelsberg just happened to be stuffed full of silver.

Those silver deposits were a prized possession of the Holy Roman Emperors and, after Emperor Otto II built a palace here, Goslar became a regular and favourite imperial residence for the next three centuries. By the mid-13th century though, the Imperial Palace was abandoned and fell into decline. A few hundred years later it was a ruin, only being rebuilt in the 19th century.

It’s hard to grasp, but this spot was the nerve centre of the Holy Roman Empire. Kings, queens, princes and Popes came here for an audience with the Emperor. Occasionally, the rulers of the many states of the empire would meet here for the Imperial Diet. It’s a memorable sight. This history, though, made it a highly-charged symbol of German power for the Nazis, and the Nazi leadership regularly attended rallies in Goslar. 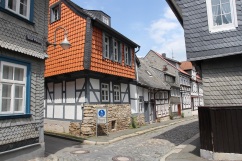 Goslar is also memorable for my first and hopefully only run-in with the German police, that is if you discount the fine I got from an East German policeman for jaywalking when the Berlin Wall still existed. A minor traffic infraction in the confusion of trying to find a car park earned me a wrap on the knuckles from an unusually forgiving plainclothes policeman.

We parked close to the palace and wandered into Goslar’s Altstadt where the uniqueness of this glorious place continued. In the English Lake District, where I grew up, vast slate quarries have provided the main building materials across the region. So it is in Goslar, and many of the half-timbered houses have slate tiles on their roofs and walls. Some are covered entirely in slate. 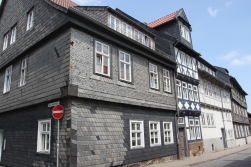 The decline of its imperial connections didn’t stop Goslar growing increasingly wealthy, especially as it became a free city. It joined the Hanseatic League, the alliance of city-states across northern Europe, showing that it was an economic power throughout the medieval period. It’s a history writ large as you walk the lovely streets of the Old Town.

We pulled up a seat at a restaurant in the Marktplatz for lunch. The square is surrounded by historic buildings, includíng the 15th century Rathaus which was covered in scaffolding – a recurring theme of our recent travels – and the 16th century Kaiserworth Hotel, once the tailors’ guild. It’s decorated with sculptures of German emperors, but also has a sculpture of a man defecating a gold coin.

One of Goslar’s main roles was to protect the Rammelsberg Mine and at certain points you can still see some of the immense defensive walls and towers that were built to do just that. The Breite Tor, or Broad Tower, is the most impressive of the remaining walls, forming a forbidding entry point to the town. At the other end of town is the 12th century Frankenberger Kirche.

In between these two points you can wander at leisure and soak up the history of this remarkable place. It’s easy to see why UNESCO made Goslar a World Heritage Site along with the Rammelsberg Mine. Covid restrictions made visiting the mine difficult, but it’s on the list for our next visit to the Harz.

11 thoughts on “Goslar, imperious Queen of the Harz”