If Weimar’s remarkable history, beautiful buildings, squares and cobbled streets, not to mention wealth of culture, aren’t reason enough to make a return visit, the fact that its most famous annual festival is dedicated to the humble onion surely must be? The Zwiebelmarkt, or Onion Market, is so idiosyncratic to be worth journeying to Weimar in October just to see the Onion Queen crowned. I mean, any town that has an Onion Queen is my kind of town.

The tradition of an onion market dates back to the mid-17th century. In the 18th century Goethe was extolling the health benefits of the onion and apparently ‘decorated’ his house with them. By the 19th century Weimar had evolved into the major onion centre for the whole of central Germany, the market had branched out to sell other vegetables. Today, 350,000 people attend the three-day festival.

We woke early on our second day in Weimar and had an onion-free breakfast in the pleasant Grüner Markt. Just around the corner in the Marktplatz a small flower market was getting going with hardly an onion in sight. The Marktplatz is not as pretty as some I’ve seen in Germany – the fact that the Rathaus was covered in scaffolding didn’t help – but it does have the Cranach House. 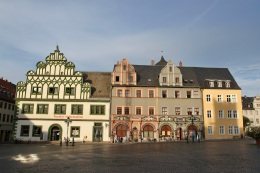 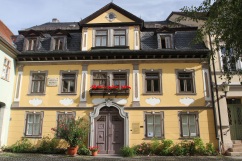 One of the most influential German painters of the Protestant Reformation, Lucas Cranach the Elder, arrived in Weimar in 1552 at the ripe old age of 80. A good friend of Martin Luther from their days serving the Elector of Saxony in Wittenberg, Cranach followed the court of Elector Johann Friedrich to Weimar and set up a studio on the Marktplatz. He died only a year later in 1553.

In that short time though, Cranach the Elder began work on perhaps the single most important artwork of the German Reformation, the Weimar altarpiece. Following his death, this epic triptych was completed by his son, Lucas Cranach the Younger. The piece remains in Weimar’s impressive Church of St. Peter and Paul. Luther preached in this church numerous times, fittingly the triptych depicts him reading from the bible. 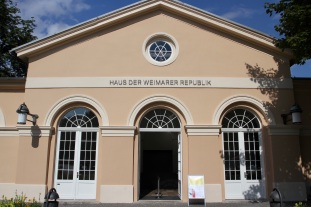 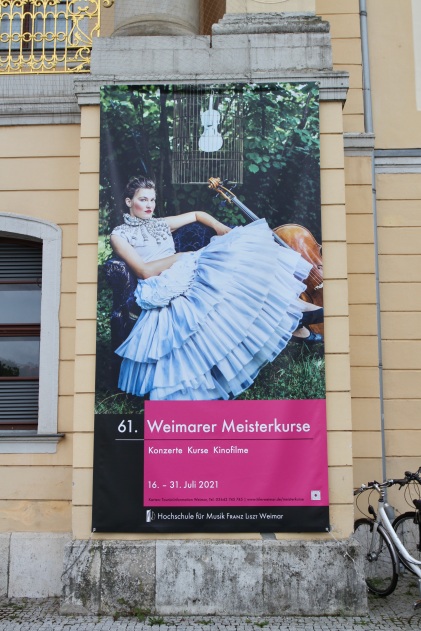 The church is a short distance from Schloss Weimar, the 400 year-old former home of the dukes of Saxony-Weimar. Like so much else on our trip, the scholss is undergoing a huge renovation programme and won’t fully reopen until 2030 – it is a pretty huge building. Fast forward a few centuries, and a few hundred metres walk in the other direction, Weimar’s national theatre awaits.

Goethe’s and Schiller’s works premiered in this building, that though is not the most interesting bit of history to have played in the theatre. The modern building reopened its doors in 1908 following a fire, only a decade later in 1919, it would play host to the first national assembly of the newly formed Weimar Republic – the fledgling democracy that struggled to be born in the aftermath of the First World War and was utterly destroyed by the Nazis.

It’s a building that carries the weight of history, but it is also a functioning theatre in a busy shopping area of the city. Across the square in front of the theatre is the Haus der Weimarer Republik, which tells the story of rise and fall of Germany’s first democratic republic. A stone’s throw away is Schiller’s former home, now a museum, and an array of other buildings with remarkable histories.

Indeed, there’s so much history in Weimar that we could have spent a week here and still not do it justice. The town though isn’t some fusty tourist trap, but a living place. This is helped by having a renowned music school that attracts students from all over the world. Their presence gives Weimar a lively atmosphere, one I hope to visit again.

6 thoughts on “Weimar, home of the Onion Queen”