The Rhine is one of Europe’s great rivers. Stretching for 1,230 km from the Swiss Alps to the Dutch coast, it once marked the limits of Roman power, and still marks the border between six countries, and passes through four before disgorging its contents into the North Sea. The iconic landscape that it has carved over millennia between Koblenz and Rüdesheim is one of the most storied in Europe.

Steep hills, topped with spectacularly picturesque castles and lined with row after row of wine producing vines, rise abruptly from the broad, meandering river below. This landscape is often described as having a fairy-tale quality. A timeless landscape punctuated by numerous pretty villages with timber-framed houses, pleasant market squares, and ancient churches.

This was my first visit to an area frequently referred to as the Romantic Rhine. I’d seen plenty of pictures, but they don’t really prepare you for this beautiful landscape. We may only have had a couple of days in the lovely small town of Boppard, but the Rhine Valley really got under our skin. Now we’re based in Brussels, getting to the Rhine is going to be a lot easier.

We arrived in Boppard in time for lunch served with a cold glass of white from the surrounding vineyards, and watched the world float by on the river. It’s remarkable just how busy the Rhine is with river barges, traveling from Antwerp and Rotterdam filled with goods from around the globe. Sitting on our hotel balcony with a coffee in the cool morning air as boats passed below will stick in my memory. 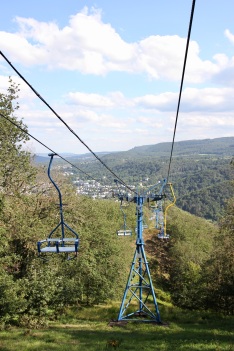 Boats on the Rhine, Boppard, Germany 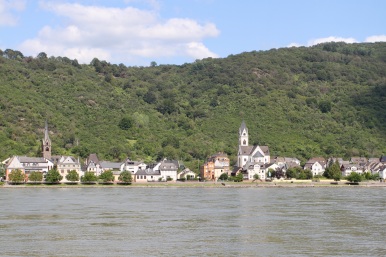 Kamp-Bornhofen on the Rhine, Boppard, Germany

There is no doubt that Boppard receives plenty of tourists, but in a pandemic year it felt quiet and relaxed. It’s a pretty and ancient place worth exploration. Viewed from across the river, Boppard’s skyline is dominated by the twin towers of the 12th century St. Severus Church, which stands at one end of the marktplatz, itself the centre of a series of narrow cobbled streets.

This is the heart of the medieval town, but Boppard dates much further back and you can still find traces of its Roman history. The Romans built a fortified town here as part of their defences against the tribes of Germania on the other side of the river. You can take in the views to the former Germania on the lovely riverside walk that runs for a couple of peaceful kilometres south of town.

Filsen on the Rhine, Boppard, Germany

Boats on the Rhine, Boppard, Germany

A stroll in the opposite direction takes you past more of the town’s 2,500 years of history, including the 14th century Carmelite Church and the 19th century synagogue, destroyed by the Nazis on Kristallnacht in 1938. A stop in the lovely garden of the Weinhaus Heilig Grab allows you the opportunity to sample some local wines before tackling the heady heights of the Boppard Sesselbahn.

The Sesselbahn is a 915-metre-long chairlift that takes you in wonderful silence to the Vierseenblick, a viewing point that commands one of the great Rhineland panoramas. The trip on the chairlift lasts around 20 minutes and reveals an ever expanding view over the valley and river below. At the top a short walk brings you to a cafe and viewing point with breathtaking views of a sweeping bend in the river.

Dismounting the chairlift we were greeted by a sign that read, ‘Welcome to Gedeonseck, View of the Bendiest Bend of the Rhine’. They aren’t wrong. We went up at the end of the day and stood mesmerized as the sun illuminated the valley below. In the morning we would leave for Brussels and life in a different country. As farewells go this must be one of the finest.

As we left the Sesselbahn a large sign proclaimed ‘Ausgang’, literally, the exit. It felt right, but not before we had one final Rhineland evening sampling wine and food on the banks of the river.

2 thoughts on “Along the Rhine, getting the bends in Boppard”