The black and white (often not alive) animals that are the creation of Belgian street artist, ROA, can be found decorating the walls of cities all over the world. I’ve seen them in Perth in Western Australia, Buenos Aires in Argentina, Bangkok in Thailand, and in his native Ghent, right here in Belgium. If you asked me to name another Belgian street artist though, I would definitely lose points in the pub quiz.

A few months ago the same could have been said about my knowledge of Brussels as a city with a street art scene. While it may be quite a while before the Belgian capital can compete with powerhouses like Berlin, it definitely deserves a better reputation. While its love affair with comic strip art is clear to see, this is a city evolving into a street art hotspot in its own right.

In the last decade, there have been concerted efforts by city authorities to capitalise on street art’s popularity: a ‘come for the street art, stay for the waffles’ strategy. A current government minister, Karine Lalieux, helped establish Parcours Street Art in 2012 and, in 2016, a street art route to rival the comic strip route. A budget of €100,000 funded the project.

If the plan was to beautify some fairly grimy parts of the city and establish a reputation for street art, it seems to be working. Brussels street art is more than just the tourist board generating a buzz about the city though. If art is a reflection of the society that produces it, then the colourful image of Ihsane Jarfi that stares down from a wall on Rue Saint-Christophe, paradoxically reflects some of the worst of the 21st century. 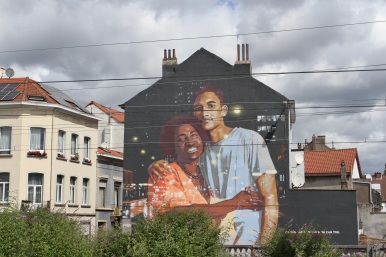 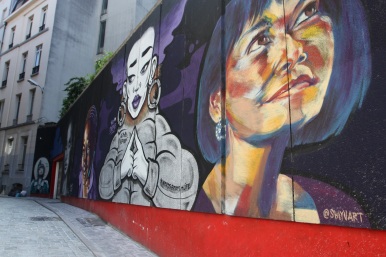 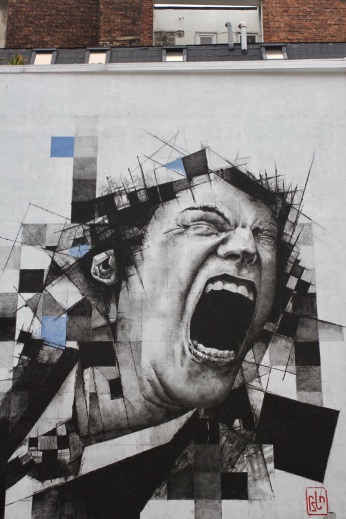 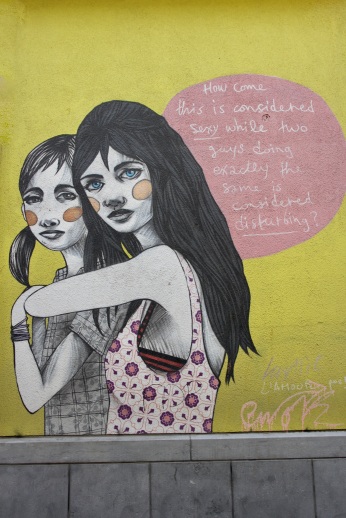 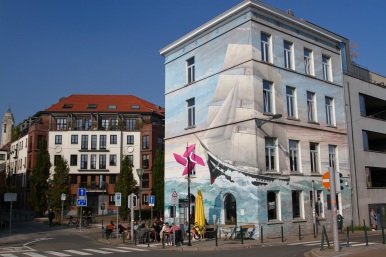 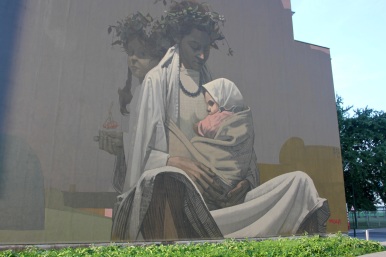 A 32 year old gay man from Liege, Ihsane Jarfi was brutally murdered in 2012. Amidst the shock and outrage, it became the first murder to be treated as a homophobic attack under new Belgium laws. If you weren’t aware of this tragic story, the vivid colours and serene smile of an artwork called ‘Love Remembers’, give little hint of the intolerance and violence that inspired this message of hope.

Other Parcours artworks can be found in the northern, less well heeled bit of Brussels. I assume in the hope that it might provide a nudge towards urban regeneration. Or at least some footfall from visitors. A walk through Laeken unearthed some impressive pieces: including a tribute to George Floyd, whose murder in May 2020 saw waves of Black Lives Matter protests in Europe. Brussels was no exception. 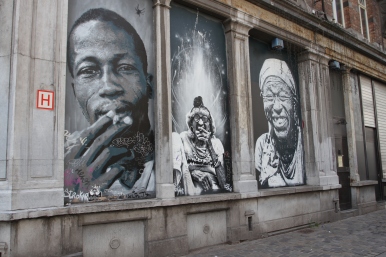 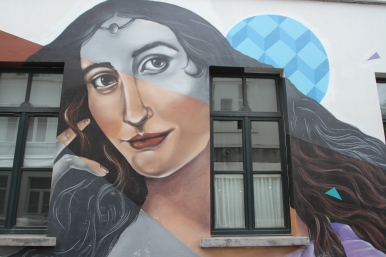 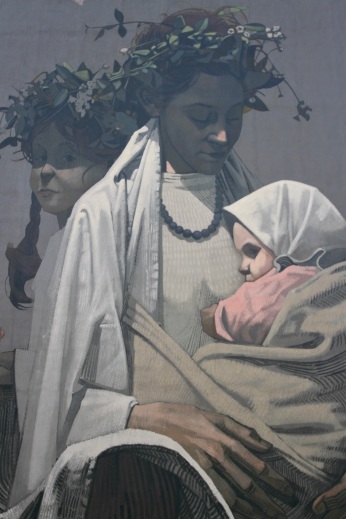 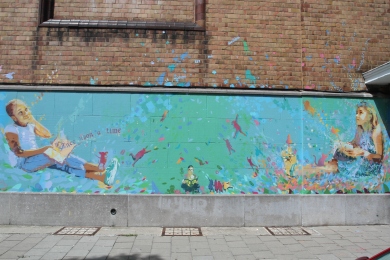 The Future is Europe, Brussels, Belgium

While some street art is promoted and approved of by the authorities, graffiti remains illegal in Belgium. The police have, until very recently, frequently arrested and even imprisoned street artists whom they consider to be vandalising property. Brussels offers a free graffiti removal service. This though runs counter to the desire to present Brussels as a creative and vibrant place.

It’s fascinating to me that street art is almost competitive between cities, to lure both creative industries and tourism with the urban chic street art can convey. That creates a philosophical chasm between the radical, anti-authoritarian roots of street art and its modern use. Brussels, with lots of illicit if not illegal art on display, isn’t quite there yet, but the corporatization of street art seems well under way.

Even the institutions of the European Union have got in on the act. The Future is Europe is rare piece of street art in the EU zone with an eminently debatable slogan. In the city centre, artworks like the 12-metre-high Manneken Peace, are very much on the tourist trail. Manneken Peace was created for the 30th anniversary of Belgian Hip Hop, a fact that begs more questions than it answers.

My favourite Brussels street art so far has to be the impressive Mother by Polish artist Sainer. A 400m² mural with a mother and child that takes up the side of a building close to Gare du Nord. A young girl holds a piece of Rowen tree in her hand, said to warn of impending danger. It seems a fitting sentiment given the flow of undocumented migrants who daily pass by here on their perilous journey.