Look at a map of Hasselt from the 1770s, just as the Industrial Revolution was about to change Europe forever, and compare it to a map of the city today. The distinctive shape of the ancient town is still clearly visible within the ring road that has replaced the medieval city walls. During the intervening 250 years the town spread out, but the heart of modern Hasselt still faithfully sticks to the former medieval city plan.

That though is just about all that’s left of the once historic town that by the 14th century had become wealthy as one of Europe’s leading cloth manufacturers, renowned for the high-quality of its cloth that was sold across Europe. A few notable buildings aside, modern Hasselt is mostly a discordant mix of architectural styles that have stripped it of the historic charm found in other Belgian towns.

This might explain why it receives little attention from tourists. Yet, Hasselt has much to recommend it, and not only as a base for exploring the surrounding countryside. Much of the town centre is pedestrianised, making it one of car obsessed Belgium’s most pleasing urban walking experiences, and that makes exploring the rather fabulous street art route more pleasant as well.

In this cloth town it’s not surprising there’s a good museum dedicated to fashion. Hasselt, though, has another industry also celebrated with an excellent museum, it was this that drew me here in the first place. For this is the home of Belgian jenever, a drink I’d known as Dutch gin. The visitor to the Jenever Museum is rewarded with a glass of the 40% tipple behind the phrase “Dutch courage” and known as “the spirit of Belgium”.

Set in a former 19th-century steam distillery with much of the original machinery still on display, the museum tells the social history behind jenever and made me realise that the shared history between the Netherlands and Belgium runs deep. In the museum’s bar, I got talking to the bartender as I sampled a local jenever, and we discussed the National Jenever Museum in the Dutch town of Schiedam.

The two museums are closely, if not officially, linked. The bartender bemoaned historical fate that meant the Schiedam museum sits picturesquely alongside the town’s main canal, Dutch barges parked below, while the Hasselt museum has a more mundane setting. That said, there is a nice park behind the old distillery, here you can sit in the spring sunshine to recover from a snifter or two of the local hooch. 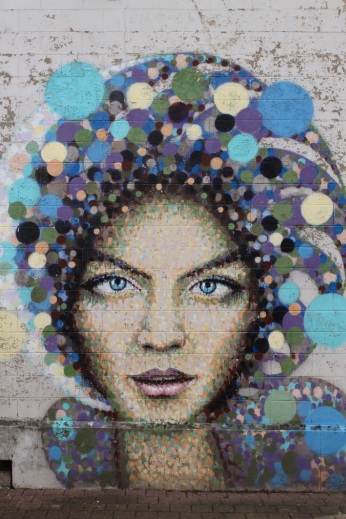 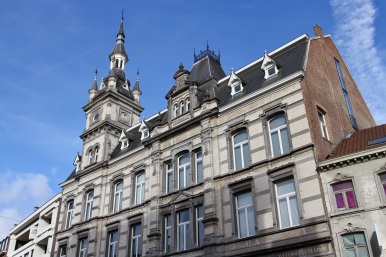 Back on the streets I spotted pieces of street art as I made my way towards St. Quentin Cathedral. Founded in the 11th century, it was only finished in the 18th century and only received cathedral status in the 20th century. It is surrounded by small squares, their names giving away their historic purpose – Vismarkt, Fruitmarkt – now filled with bars and restaurants.

The town’s Grote Markt is nearby but a bit of a disappointment to anyone who has visited other historic Flemish towns. What does live up to billing is Hasselt’s two town halls. The 17th century Stadhuis stands in stark contrast to the modern town hall, which is dominated by a 900 m² oblique mirror wall that towers over surrounding buildings. It’s a wonderful architectural addition to the town.

After lunch in a nice place on the Grote Markt I strolled along the rapidly gentrifying canal basin. Here you can link up to bit of parkland that was once part of the former city walls, it took me past the Oud Kerkhof, a late 18th century cemetery with some wonderfully ornate memorials. I meandered through the town back to the train station infused with a warm feeling for the town of “the spirit of Belgium”.

3 thoughts on “Hasselt, home to “the spirit of Belgium””