To call Johannes Vermeer’s birthplace a living museum is a little unfair. Delft has more life than most museums, and the buzz of activity late on a Sunday morning as people start populating the open air cafes, gives the town a well loved, lived-in feel. That doesn’t stop it being as picture postcard perfect as any town I think I’ve ever seen. Despite the trappings of 21st Century life, the town is so well preserved it really is possible to imagine what it might have been like when the 17th Century Dutch Master lived and worked here.

The old city centre is bursting at the seams with beautiful historic buildings, including the amazing looking City Hall which stands on the opposite side of Markt, the large central square, from the towering steeple of Nieuwe Kerk (New Church). The whole vast space of Markt is surrounded by cafes, restaurants and tourism-themed shops, but it is the size of the square, coupled with the grandeur of the buildings that you’ll take away from wandering through it. 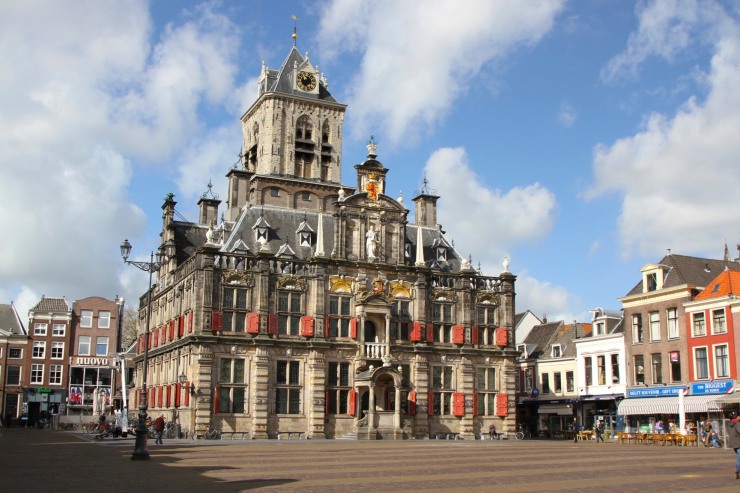 Delft has a long and glorious history, something the modern tourism industry rarely loses an opportunity to remind you of as you stroll around. Images of Vermeer’s most famous painting, Girl with a Pearl Earring, can be spotted almost everywhere, including when you arrive at the train and tram station. Some seem to be attempting to replicate the original, while others are clearly trying for a more Scarlett Johansson-style visage – not always with results that would please her agent.

All this ‘Pearl Earring’ thing wouldn’t be quite so irritating if the actual painting was in Delft. Its not, its in The Hague, where you never see any giant paintings on the side of buildings or Delftware encrusted artworks on walls.

A town that attracts a large number of tourists, it isn’t surprising that the good townsfolk of Delft have pulled out all the stops and left few clichè unturned. There is at least one giant wooden clog, a shop selling an enormous number giant cheese rounds, and then there is Delftware. The town is equally famous for its pottery industry, the famous blue and white Delftware, with perhaps it’s most iconic symbol – two traditionally attired children kissing.

Tourism everywhere trades on clichè, but I think Europe is particularly guilty of pushing the boundaries. I actually saw several people walking the streets with one of those giant cheeses in their possession – something they’d presumably regret when they came to pack their suitcase only to realise Ryanair were going to rip them off for €50 to check it into the hold.

The town received city status in 1246, but it had been founded on the banks of a newly dug canal much earlier. Fittingly for a city which grew up around a canal, the historic centre of Delft is criss-crossed with canals, which themselves are criss-crossed with innumerable bridges. Strolling down the canal banks and exploring some of the small and intimate side streets is a real joy. Most of the city centre is traffic free but, in keeping with my experience in The Hague, there is very little traffic on most of the streets.

It is also remarkably easy to reach Delft from The Hague. There is a tram that goes from city centre to city centre, it takes about 30 minutes and it costs about €2. A bargain by any standard. I didn’t have a huge amount of time to wander and wonder, although I did stay longer than intended; I was having a quick look around while on my way to a giant Ikea store. Despite needing a bed for my new apartment this was, it turned out, an extremely foolish thing to do on a Sunday.

I’d conservatively estimate that half the population of the Netherlands, possibly more, were inside the store. Presumably the other half had visited in the morning before I got there. It made for an unpleasant experience which was made all the more stark by the contrast between lovely Delft old town and a low cost Swedish furniture store. I’ll definitely be back to Delft to explore some more and to visit some of the (I’m told) excellent museums and galleries.

4 thoughts on “‘Girl with a Pearl Earring’ overload, a trip to Delft”