Too excited to sleep, I was up early to wander Dresden’s quiet streets. There was a chill in the air, but the city was at its most evocative in the early morning light. It may just be my overactive imagination, but the ghosts of Dresden’s legendary history, ancient and modern, seemed to accompany me as I passed down cobbled streets in the shadow of Baroque churches. I was stopped in my tracks at the open space in front of the sublime Semper Opera House. The sun transforming the brown stone with golden hues.

A short stroll brought me to the courtyard of the magnificent Zwinger Palace, partially under reconstruction but still one of the most beautiful buildings in Dresden. I had the entire place to myself, and I sat on the edge of a fountain to drink in the atmosphere. On the orders of Saxony’s greatest ruler, Augustus the Strong, the Zwinger was built in imitation of the Palace of Versailles. As the sun crept over the gardens, I walked around admiring the Baroque flourishes of the buildings.

Dresden is in many ways the city of Augustus the Strong, King of Poland and Elector of Saxony. Although the Dukes and Electors of Saxony had made Dresden their capital in 1485, it was the man known as “the Saxon Hercules” who has left perhaps the greatest mark on the city. During his rule Dresden became one of Europe’s great cities and a leading cultural centre. Augustus may have left a mixed legacy as a military ruler – he was no Frederick the Great – but Dresden thrived.

Perhaps the finest of all Augustus’ cultural legacies is the Grünes Gewölbe, the Green Vault, one of Europe’s earliest museums that he filled with priceless treasures. The tickets aren’t cheap, but a visit to the Green Room in a former royal palace is worth the €21 price tag. The entire building was destroyed in the Second World War, but it has been lovingly restored to its former glory. Photography isn’t permitted, so you’ll have to take my word that it alone is a reason to come to Dresden. 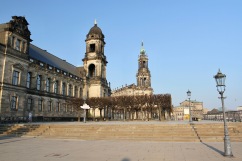 Around the corner from the Green Room, Augustus features in one of Dresden’s other iconic sights, the Fürstenzug. This time though he doesn’t take centre stage. That honour goes to Conrad I, who founded the dynasty that would rule from Dresden until the catastrophe of the First World War. This 102m long depiction of all but two of the rulers of Saxony contains 23,000 glazed porcelain tiles made in nearby Meissen. The 35 rulers depicted cover a period from 1127 to 1904.

The presence of porcelain tiles gives a hint of another reason for Dresden’s fame and wealth. Augustus the Strong was responsible for inventing European porcelain, a much sought after luxury product. He sponsored unsuccessful experiments in Dresden before efforts moved to Meissen, where they bore fruit. Porcelain would decorate the palaces of Saxony for centuries to come. The Fürstenzug is close to Augustusbrücke, where I crossed to the north bank of the River Elbe. 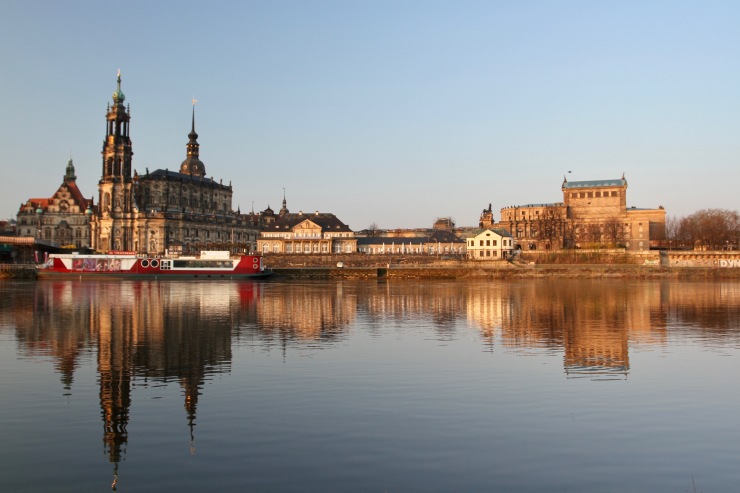 The views back across the city were magnificent, the spring sun illuminating the spires and domes that punctuate the cityscape. The views of the city were ever-changing as I walked along the riverfront towards the main road bridge, and for the first time it was possible to truly understand why Dresden was known as “Florence on the Elbe”. The Brühlschen gardens provided views over the Frauenkirche, before my stroll finished along Brühl’s Terrace with views over the Elbe.

It was time for a late breakfast, but Dresden had already proven itself as the capital of Saxon royalty – with architecture to match.

2 thoughts on “Dresden, the city of Augustus the Strong”