My flight back to Berlin was via Istanbul’s ginormous new airport, and it departed at the ungodly hour of 4am. I spent my final evening wandering the lovely streets of Old Tbilisi and, afterwards, I sat at an outdoor table having a long, slow meal until the early hours of the morning. This gave me time to look back over some of the scribblings I’d made during the trip, and to reminisce about the experiences, good and bad, of my first visit to this extraordinary country.

Returning from close to the Russian border, I passed two road signs that helped me to understand the feeling of unfamiliar familiarity that had been nagging at me since I first landed in Georgia. The first sign read, Tehran 1294km, the other, Ankara 940km. This is a place that straddles cultures and comes with a history intersected by hugely diverse forces: Mongol invasions, Persian overlords, early Christian conversion, Ottoman rule, and centuries of overbearing Russian control, Tsarist and Soviet.

This fusion of cultures is clearly seen in Georgian food. A glass of wine accompanied by bread and sunflower oil with harissa-style chilli paste – a taste of North Africa in the Caucasus. I devoured khinkali, the soupy, meat-filled dumplings that have more than a passing similarity to their Chinese cousins, Xiao Long Bao. The abundance of aubergine dishes is reminiscent of the Middle East and Turkey. Whatever the influence, Georgian food is invariably delicious, even if it lands on the table in no particular order.

On my way to dinner, I’d passed down narrow streets, past the crumbling facades of houses and beneath overhanging balconies that looked dangerously close to collapse. I was stopped in my tracks by the sight and sound of a young girl joyfully playing a piano in an alleyway, I was her only audience. In the courtyard behind her I could see washing hanging from lines strung between buildings, underneath which a dilapidated car was in various stages of (dis)repair – Georgia’s roads are filled with such specimens. 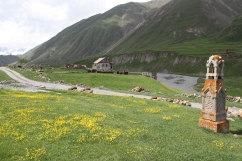 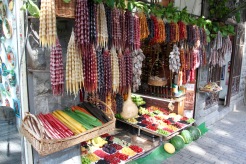 Driving provided some of the most memorable moments of my trip, and not in a good way. There exists a phenomenon on Georgian roads which I’ll call the ‘mythical extra lane’. Drivers routinely overtake two, three or four abreast on two lane roads, often at high speed, uncaring that at any moment animals are likely to wander into the middle of the road. Tbilisi’s rush hour has only one rule, there are no rules. It’s a literal miracle that I didn’t lose my €500 hire car deposit.

Georgian driving regularly goes well beyond ‘reckless’, but it was the only way I could see many of the places I planned to visit. The enormous 4×4 I acquired in Tbilisi allowed me to reach some fairly remote areas. I certainly wouldn’t have seen the bright purple lavender patches in the fields or smelt its sweet perfume on the air in the Mtkvari River valley. The drive into the High Caucasus Mountains on the Georgian Military Highway will live long in the memory.

As will watching children playing in the street, or rather a small child with sweets being chased by another small child holding a bunch of stinging nettles; an old man shaving his nose while drinking a beer; eating breakfast of homemade bread, butter and cheese in the mountains; glorious landscapes of hulking mountain ranges, vineyards, sweeping grasslands; ancient monasteries on remote hilltops; pretty compact cobbled streets in Tbilisi’s old town … the list goes on, and I’ll be going back to Georgia as soon as I can.

2 thoughts on “Reflections on a Georgian road trip”