A few months before the fall of the Berlin Wall and the collapse of the Soviet Union, I found myself stepping off a train in Bratislava, Czechoslovakia’s second city. This was the time of Mikhail Gorbachev, and political reform, known as glasnost, was having a thawing effect across Eastern Europe. My train carriage from Prague was full of young conscripts, not much older than myself, heading home for the holidays. We didn’t share any common language, but by the time we arrived we were firm friends.

How a capitalist student and a bunch of communist soldiers managed to hit it off so well, is probably best explained by the amount of beer and fiery plum brandy, slivovitz, that we’d drunk along the way. The Danube flows through Bratislava on its way from Vienna to Budapest, my first sight of this majestic river was through a drunken haze. A few days later I had a dilemma, follow the river East to the Hungarian capital or, against the flow, West to Austria.

Probably under the influence of British New Wave band Ultravox’s Vienna, I chose to go west. It has taken me slightly over 30 years to finally discover whether that was the right decision or not. While I’ll never truly have an answer for my teenage self, I’d have loved to have seen Budapest before mass tourism changed it forever. We visited in late autumn, outside the main season, but tour groups still flooded the castle district and Jewish Quarter. Summer must be hellish.

These were minor irritations when set against the magnificent mix of history, culture and culinary delights that Budapest offers in abundance. If the city has a feel of Prague about it – cut in two by a river with the castle on one bank and the town on the other – set amidst the Buda Hills, it has a more beautiful location and feels more cosmopolitan. Plus, there seem to be far fewer British stag parties roaming the streets, which is only ever a good thing. 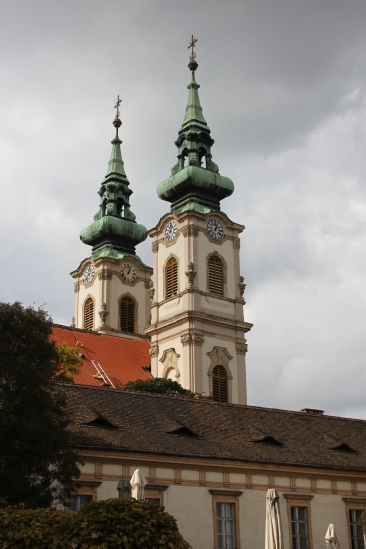 We had four days to explore the city, by the end of which we realised that another four days would be needed to do it justice. I had a list of things to see, do, eat and drink from two Hungarian colleagues, many of which remain to be ticked off. We stayed close to the Hungarian Parliament, minutes from the banks of the Danube, and spent most of our time in the central areas of Pest and in the Castle District across the water in Buda.

An excursion to the Gellért Thermal Baths (it’s illegal to visit Budapest without visiting one of the many baths), left us with half a day to explore District 11. Known as Újbuda, it’s close to the university and filled with good cafes and restaurants, as well as trendy bars and galleries. This felt like a real Budapest neighbourhood, well away from Pest’s nightlife and the mass tourism of the castle. There are twenty three districts in the city, we saw only a handful.

We arrived days before local elections, and Budapest was covered in posters for the ruling Fidesz and a multitude of opposition parties. Once a leader amongst post-Soviet democracies, Viktor Orban’s decade of autocratic government has severely damaged the rule of law and democratic norms. Orban himself describes this as “illiberal democracy”, but let’s call it what it is: autocracy mixed with far right and racist rhetoric and policies.

Orban remains popular (and populist) but his hold on power may be slipping. Shortly after we returned home, Fidesz lost control of Budapest and several other urban areas. Overnight, Budapest became a more ethical place to visit. That’s good news, because we really want to go back and explore more of this city and country.

1 thought on “A Budapest Weekend”