Berlin seems to have invented a new genre of street art – mattress art. I came across the arresting sight of two mattresses being used to convey messages way beyond my understanding, while meandering aimlessly through Kreuzberg, a Berlin street art hotspot. If that wasn’t enough, on the same walk I also came across perhaps the most terrifying piece of street art I’ve ever seen. There is something properly disturbing about a giant baby/man hybrid.

What local residents think of the hideously muscular and angry-looking steroid-using baby that adorns a wall on Wassertorstrasse, is anyone’s guess. Ron English’s Tempertot is anything but easy to look at. As you might expect from an artist who paid $700,000 for a Banksy art piece and immediately threatened to whitewash over it, this Berlin piece is equally uncompromising. This isn’t the world’s only Tempertot, there’s a green one in New York that I’ll be be doing my best to avoid.

Not too far from the terrible tot, just across the Landwehr Canal, the once splendid The Future is Female by Case Maclaim has suffered defacement by what looks like someone throwing paint bombs. It’s a shame, this painting of the artist’s friend and his daughter is a great piece. I’ve seen this type of ‘attack’ on a couple of other large (building-sized) pieces in recent months, the exact same paint bomb MO. 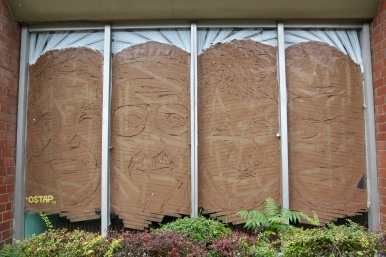 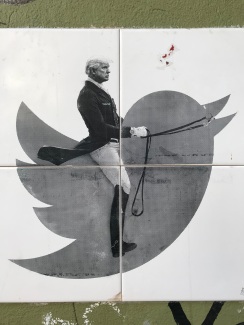 Perhaps this is in response to the more organised and commercial form of street art that Berlin is now embracing, or maybe it’s just bog-standard vandalism. Whatever it is, it’s certainly annoying. I made my way towards Bülowstrasse, to check out what’s been going on in Urban Nation’s backyard. There were quite a few things I’d not seen before, including a wonderful art-meets-biblical history combo depicting The Last Judgement and an Angel of Mercy. These take up two side of the same building.

Along here were several new pieces, including one by Nafir, an Iranian street artist that I’ve seen a couple of times in Berlin. A woman holds a placard of protest reading ‘FREE WIFI’, which has been defaced to read ‘FREE WIFE’. There was also a woman cradling Disney’s cartoon dog, Pluto. Over the road from which is a piece called Grey Habitat. Along with a couple of other artworks, this building-specific piece has been there for a few years, but I’d never photographed it before.

In a nearby window packing tape had been used to create portraits of four people, a type of art you don’t see very often. If you know who the portraits are meant to be, let me know. My favourite piece on this Berlin ramble though, was a sticker of Donald ‘he’s going to get us all killed’ Trump. Dressed in fox hunting gear, Trump’s riding a Twitter bird (pub quiz factoid, the bird is called Larry), presumably in his attempt to hunt down truth and kill it.

That’s the beauty of Berlin street art, whether it covers a building, or is no bigger than a beer mat, there’s always something new to catch the eye as you make your way through the city.

13 thoughts on “The Future is Female … Berlin Street Art”