Housing, affordable or otherwise, has always been a political hot potato. In 1950s Berlin though, housing became an extension of the Cold War. Architects, the generals of a battle for hearts and minds. Berlin was a city of ruins and rubble in 1945, but even before the brick dust had settled the race was on to prove which of the Cold War’s two competing ideologies, communism or capitalism, would win the peace. A cultural contest at the heart of Superpower rivalry.

Replacing housing destroyed in the war was a priority for Berlin, East and West, and in the process new ideas for a post-war world flourished. Monumental residential blocks sprung up along the newly-named Stalinallee (now Karl Marx Allee) in the Soviet-occupied East. After the war, this area was little more than rubble, and the breakneck pace of construction coupled with classical facades and cheap rents, meant the Soviets could claim a moral victory for socialism.

In the dictatorship of the proletariat, these were workers’ palaces fit for a workers’ paradise. The propaganda that accompanied their construction – the East German’s even produced a film called the ‘New Apartment’ – stung the capitalists in West Berlin into a response. Not, though, before unrealistic construction targets sparked the 1953 uprising against the communist government. That protest started on Stalinallee and ended when Stalin ordered the Red Army to crush the revolt.

In the same year, West Berlin launched the Interbau 57 design competition to put itself on the map architecturally. The competition featured 52 renowned architects from 14 countries and merged modern building techniques with the principles of the New Objectivity movement that had flourished in Germany in the 1920s and 30s. In urban development it’s most famously associated with the Bauhaus. Those principles would find physical form in high-rise concrete surrounded by lots of green space. 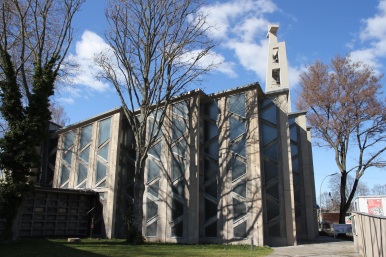 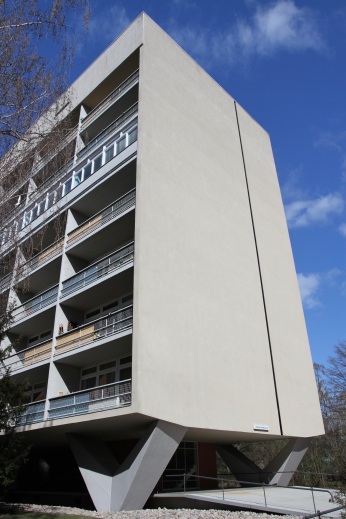 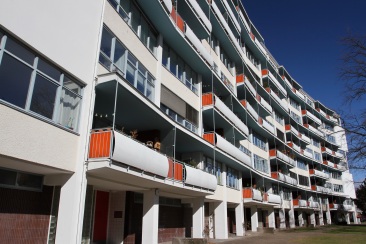 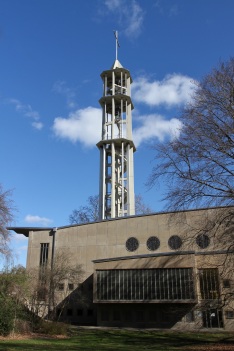 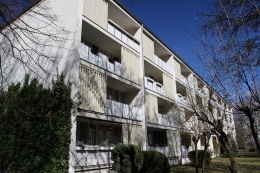 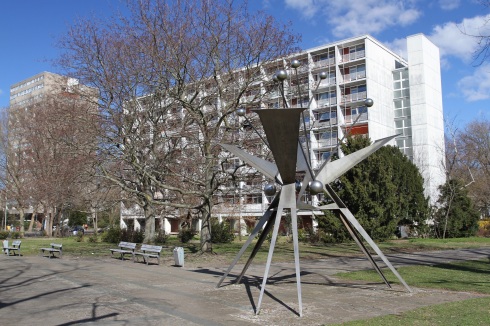 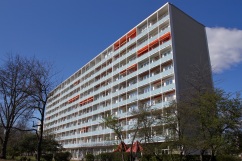 No surprise then that several of the leading lights of the Bauhaus School, including its founder, Walter Gropius, Alvar Aalto and Le Corbusier, entered the competition. Their buildings can still be seen today, mostly in the Hansaviertel, an area of Berlin wedged between the River Spree and the Tiergarten in the former British zone of occupation. My office is a short walk away, but it was only recently that I discovered this fascinating district that in 1957 attracted 1.3 million visitors.

Today, it’s a sleepy area that attracts a trickle of architectural history buffs. The contest resulted in 42 new buildings, the apartments built for the Berlin masses are still much sought after today. There are also two funky-looking churches, a library, concert hall, art gallery, shopping centre and a kindergarten. It’s hard to appreciate the symbolism of the buildings today, but in the 1950s this was a politically charged rejection of Stalinallee’s socialist realism.

Ironically, the designs were quite expensive to build, and made them unsuitable for one of the main purposes of the contest: new and affordable ways of living for post-war generations. The ideas that Hansaviertel represents have never gone away, they’ve just been adapted and updated. Which is why none of these structures would look out of place in most cities around the world today.

We visited the former Interbau 57 site on one of our coronavirus walks, the area was pretty quiet and we spent a pleasant hour wandering around the green and wooded neighbourhood. even if all the museums hadn’t been closed, none of the apartments are open to the public. There is one building that you can still visit though. The Berlin Pavillon, which was an exhibition space for the whole site, is now a well-known fast food restaurant.

1 thought on “Hansaviertel, winning the Cold War with architecture”