At times, the lovely and relaxed Baltic island of Rügen feels more like a state of mind than a real place. I’ve met people who wax lyrical at the mere mention of its name. Berlin’s relentlessly hot and sticky summers can do that to a person. Escaping to the coast and leaving urban life behind becomes something of an obsession. Even in a city surrounded by freshwater swimming lakes, the revitalising powers of a holiday in nature has a powerful allure. There’s a touch of Narnia about Rügen in the Berliner psyche.

A desire for nature and the outdoors, and near-religious attachment to the health giving properties of fresh air, sun, sea and Freikörperkultur (free body culture), or naturism as it’s better known, has deep roots here. Almost all of my colleagues make at least one trip to the coast every year, and Rügen is a prime spot. At 51 km long and 40 km wide it’s Germany’s largest island, and comes complete with picturesque villages, resort towns, rugged chalk cliffs, forests and long sandy beaches.

Add to that a sense of otherworldliness and isolation, and it’s not hard to see why it has been one of the most popular holiday destinations in the country since the 19th century. Rügen doesn’t feature high on the list of ‘must see’ sights for overseas visitors, this is largely a German love affair. Even early in the high season it felt like half of Germany was staying on the island, and keenly priced accomodation was hard to find. Unless you book well in advance, forget visiting in August.

We left Stralsund early and drove over the bridge that links Rügen to the mainland across the Strela Sound. Leaving the main road we followed small tree-lined lanes fringed by masses of wildflowers towards the upmarket resort of Sellin, which is filled with plush late 19th and early 20th century villas. Unceremoniously confiscated in the 1950s by the communist GDR, since reunification these villas have been restored to their former glory. 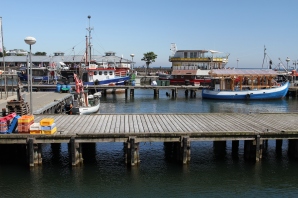 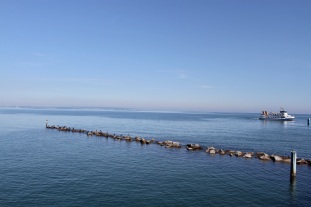 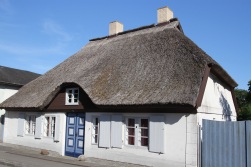 As has Sellin’s showstopper, a beautiful wooden pier. We took a stroll through the town to the cliff top overlooking the Baltic Sea. Steps led down to the small but pretty white sand beach. We took a quick promenade along the pier, which was decorated with photos of tourism through the ages as well as the destruction of the pier by pack ice in the severe winter of 1941-42. Back in the car, we headed to the equally attractive Sassnitz for lunch.

En route, we stopped on a thin strip of forest and beach wedged between sea and lagoon north of Binz. The Nazis chose this site for one of their showcase projects, Prora. This vast (and sinister) holiday resort for 20,000 people was part of the Kraft durch Freude, or Strength Through Joy, programme. It was never finished and was a ruin until recent renovations transformed it into holiday apartments and a hotel.

Sassnitz is the quintessential Rügen fishing port transformed into tourist haven. There is still a fishing fleet here, but there are probably more fish restaurants than there are boats these days. We strolled through the historic town centre which was given a much needed post-communist renovation in the 1990s, and down to the seafront promenade, eventually reaching the port and some fried fish for lunch while keeping an eye out for dive bombing seagulls.

We were staying in the tiny port of Wiek, but made a detour to visit the wild beaches along the north coast. We found ourselves driving down narrow lanes to reach the forested shoreline, before hiking to Nonnevitz beach. The woods here were filled with busy campsites and chalets, and the beach was quite busy. We strolled, dipped our toes in the frigid waters and laid on the sand listening to the waves – finally at one with nature.

6 thoughts on “Basking on the Baltic, the island charms of Rügen”