Sint-Niklaas feels far from the tourist trail but is firmly on the map thanks to the man who lends his name to perhaps the most famous map projection of all time, Gerardus Mercator. The 16th-century cartographer was born just outside Sint-Niklaas, and his 1569 world map was one of the most significnánt leaps forward in accurately navigating the world.

One of the innovations of Mercator’s map was to show north as up and south as down, and was soon adopted as the map of choice for sailors. The Mercator Projection became the dominant way to view the world. It still is, despite growing criticism of the way it distorts the size of landmasses depending upon their distance from the equator while retaining their exact shape.

It’s the reason why Britain looks a similar size to Madagascar despite being less than half the size, and why Greenland seems larger than the continent of Africa, which is in fact 14 times larger. These distortions, which inflate the size of Europe and North America in particular, are controversial because, it is argued, size matters and they have over the last 453 years made countries in Africa and Asia seem less important.

Mercator was simply trying to help sailors plot a their course around the globe, but for many the size of the distortions of landmasses aided and abetted a colonial narrative about the superiority of Europe and Europeans that is still unduly influencing people’s perceptions of the world today. It is one of those issues that has entered the culture wars in Europe and North America. 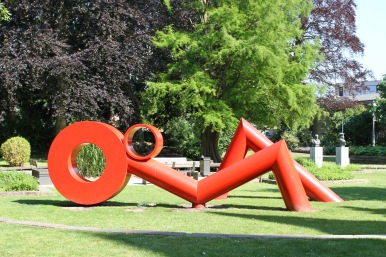 The museum dedicated to Mercantor avoids these controversies to concentrate on the maps themselves and the evolution of maritime navigation. The museum’s high points are 16th century map books and atlases by Mercator himself, alongside maps from later centuries. Mostly the information is only in Dutch, but admiring these ancient navigation tools requires little translation.

Besides Mercator, the town boasts the largest Grote Markt in Belgium, featuring the 1878 neo-gothic city hall. In front of which is a statue of Saint Nicholas, or Sinterklaas, the Dutch Santa Claus, after whom the town is named. The local tourist board refer to the statue as a “tremendous masterpiece”, but in all honesty it looks more like an oversized decoration that you might find on a Christmas tree. 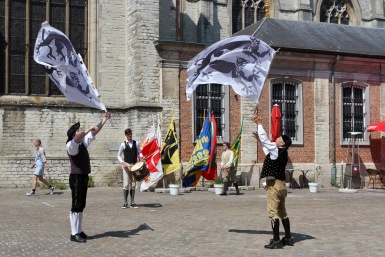 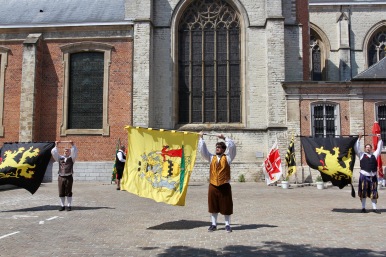 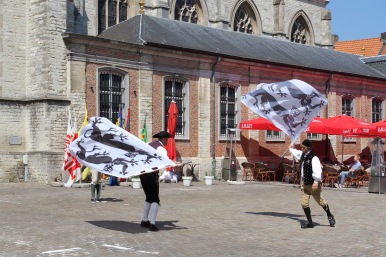 It was lunch time, so I walked to the De Witte Molen, a functioning flour mill once part of Roosenberg Abbey. Volunteers keep it alive and still mill flour here. The old miller’s cottage is now a restaurant serving good food. In the 1920s and 30s, Sint-Niklaas had a period of growth and many new houses were built in the Art Deco style, I passed a number of them on my way back to the centre.

Back in the Grote Markt I found a group of people in traditional dress with an abundance of flags. They formed a column and marched across the square to Sint-Niklaasplein, a lovely square next to the town’s oldest church, Sint-Niklaaskerk. There wasn’t much fanfare, but once in the square there began a series of ‘competitive’ flag waving. Some by individuals, others in groups accompanied by drums and Flemish bagpipes.

I pulled up a seat at a cafe, ordered a local beer from the Brouwerij ‘t Paenhuys, and watched the show. I asked the waitress what the flag waving was all about. She claimed ignorance, but it turns out that flag waving is a thing in Flanders and dates back to medieval guilds. It was quite fascinating, but all very low key with only a few people stopping to watch.

After all that excitement, I spent another couple of hours wandering the compact town centre, stopping in the Vidtspark, home to an open air photography exhibition and the 16th century moated Walburg Castle. Landing back in Sint-Niklaasplein, I joined the happy throngs sat at cafe terraces and had a drink before making my way back to the station.

1 thought on “Fun with flags in Sint-Niklaas”