The best place to end the day and watch the sun go down in Essaouira is on the old Portuguese fortifications, the Scala. People come to promenade and to meet friends and family as the sun slowly sinks into the Atlantic. In an enigmatic ancient city, this is the most atmospheric spot to observe people at leisure. Atop these ancient fortifications, it literally feels like you’re at the edge of the world awaiting an assault by roaming fleets of Phoenicians, Barbary Pirates or Portuguese men-o’-war.

The fiction would be easier to maintain if the gun ports and canon weren’t being used as seats for chatting friends, but the relaxed vibe is part of the charm of visiting Essaouira. You can enjoy the sunset from restaurants that overlook the sea defences, or you can join the locals strolling along taking the sea breeze as the waves crash into the rocks below, before plunging back into the medina. Whatever you do, make sure to spend at least one sunset on the Scala.

If the Scala is the most atmospheric place to watch the sunset, the dimly lit alleyways and lanes of Essaouira’s medina at night are just as intoxicatingly atmospheric. Searching for a restaurant in this web of narrow streets you’ll pass lit braziers advertising the services of a local hamman and small artisanal workshops. The eerily quiet streets can suddenly transform as you turn a corner and find yourself amongst a bustle of people shopping.

We woke on the second day of our visit and after a breakfast overlooking the rooftops, headed to Essaouira’s famous beach to blow away the sights, sounds and smells of the medina. There’s a reason Essaouira is a big hit with kite surfers, this is one of the windiest bits of coastline I’ve ever stood on. If you don’t mind a little sand being blasted at you, the walk along this vast beach is a good way to build an appetite for lunch. 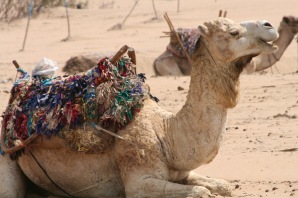 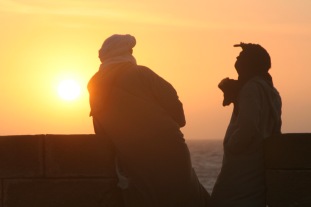 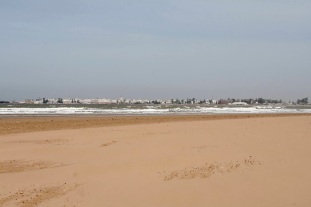 Hammam in the Medina, Essaouira, Morocco

After a few kilometres we stopped for a glass of the local pinot gris at one of several beach restaurants – it’s not always easy to get alcohol in Morocco, but it is a wine producing nation and thanks to the generally laid-back vibe in Essaouira it’s quite common to find places serving wine or beer. We figured we’d earned it after walking into a very stiff breeze for an hour. There are great views of the town and if you can’t face the walk back you can hire a camel on the beach.

We stopped at Borj el Baroud, a ruined watchtower crumbling into the Atlantic. Known as ‘The Castle in the sand’, this is the origin of a persistent myth that the ruins inspired Jimi Hendrix’s 1967 song, Castles made of sand. Hendrix visited Essaouira in 1969. The site is close to the tiny village of Diabat, which trades on another myth, that Hendrix spent time here. By the 1970s there was a sizeable colony of European and North American hippies messing up the place despite the fact Hendrix never set foot in the village.

The Hendrix myth may be enough to build a small tourist industry on – it’s even claimed that he fathered several children – but Hendrix did visit Essaouira and he wasn’t alone. In the 1960s this was a haven for artistic ‘refugees’, including Cat Stevens, Jefferson Airplane and Frank Zappa. This hints at a larger truth, in the 1960s Morocco was seen as an open, liberal refuge for artists, musicians and writers, and they flocked here.

This is somewhat ironic. This was also the height of the Cold War and, in the 1960s and 70s , Morocco had a terrible record of human rights abuses against any form of opposition to King Hassan II and his government. The myth and reality of this time have at least bequeathed an artistic legacy to Essaouira. The town now hosts a couple of renowned music festivals, the most famous of which is the Gnaoua Festival of traditional North African music. A good reason to return.